He said that instead of connecting us to the world, the Web is connecting us back to ourselves in an invisible feedback loop and the biigest threat for the future of the web are “junk food search algorithms”.

His new book The Filter Bubble: What the Internet Is Hiding from You is set for release May 12, 2011. In it, he asks how modern search tools — the filter by which many of see the wider world — are getting better and better and screening the wider world from us, by returning only the search results it “thinks” we want to see.

Watch latest Eli Pariser TED talk and will realize such serious problems described in his book:

And some quotes from the latest Eli Pariser interview for Lynn Parramore of  Salon:

Why is this dangerous?

We thought that the Internet was going to connect us all together. As a young geek in rural Maine, I got excited about the Internet because it seemed that I could be connected to the world. What it’s looking like increasingly is that the Web is connecting us back to ourselves. There’s a looping going on where if you have an interest, you’re going to learn a lot about that interest. But you’re not going to learn about the very next thing over. And you certainly won’t learn about the opposite view.

If you have a political position, you’re not going to learn about the other one. If you Google some sites about the link between vaccines and autism, you can very quickly find that Google is repeating back to you your view about whether that link exists and not what scientists know, which is that there isn’t a link between vaccines and autism. It’s a feedback loop that’s invisible. You can’t witness it happening because it’s baked into the fabric of the information environment. 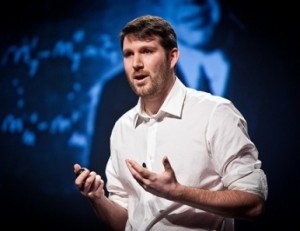 Let’s turn to net neutrality. You’ve been at the forefront of harnessing the Internet in a way that allows ordinary people to participate in the political arena. Why is net neutrality important to a democracy?

It’s extremely important because the Internet was built on the principle that it would carry all different types of data. And it didn’t really care what kind of data it was carrying. It was going to make sure that it got from Point A to Point B. That’s the Internet: There’s kind of a social contract between all the machines on the Internet that says, “I’ll carry your data if you carry my data, and we’ll leave it to the people on the edges of the network — to your home PC or the PC that you’re sending something to — to figure out what the data means.” That’s the net neutrality principle. It’s really at the core of the founding idea of the Internet.

Now, big companies like Verizon and Comcast are looking at how the Internet is eroding their profit margins. They’re saying to themselves, what can we do to get a piece of this growing pie? They want a tiered Internet where you can pay them to go to the front of the line with your data. That will really erode that amazing thing we all know the Internet facilitates: that anyone with an idea can reach the world. You talk to venture capitalists and they’re scared. They say a new start-up is just never going to be able to buy the speed that a Google or a Microsoft will be able to. Incumbent industries will be able to get their data to you quickly and new start-ups won’t have a chance. And as a result, you’ll have a drying up of the entrepreneurialism that’s happened on the Internet. And you’ll have a drying up of the Wikipedias, the nonprofit projects. Wikipedia works because it’s just as fast as Google. When Wikipedia starts to slow way down relative to Google, you’re more likely to just go to Google. So that’s a problem.

If you have the filter bubble and a non-neutral Internet, doesn’t it become even harder to find alternative points of view and for the dissident voice to be heard?

Yeah, and you know, I think this isn’t pessimism. This is realism. Tim Wu wrote a new book called “The Master Switch,” which talks about how every new medium in telecommunications history has had a period just like what we’ve seen with the Internet. There was democratization and openness, and people have dreamed these really big dreams — about the telegraph, about the telephone, about the fax machine. They dreamed it was going to connect us all together and transform everything, and that it could never be owned.

Everybody has been saying the exact same thing about the Internet. This is like the eighth time we’ve been through this. The likelihood is that the Internet will be owned by a few large media companies. The question is, can we rally around this brief moment of incredible efflorescence of creativity and innovation, and say, “No, thank you very much, we want to keep it like this”?