The world advertising print edition number one – the Advertising Age just turned 80 years. To mark the occasion AdAge.com produce a very interesting history timeline annonced as From the Great Depression Through the Great Recession: A Brief History of Marketing – 80 highlights from 80 years.

Here are some of them:

In the 50’s Ad Age produced a three-part series on Procter & Gamble:

In 1985 Coca-Cola Co. introduced a new formula for its signature soda, betting a sweeter taste would appeal to consumers who had taken the Pepsi challenge and preferred Coke’s sweet nemesis. The marketer planned to discontinue the old formulation in favor of “new Coke.”
The decision came to be seen as one of the classic marketing blunders of the 20th century. Pepsi gleefully ran ads saying: “The other guy blinked.”
Coca-Cola was hit with a PR disaster and consumer revolt. In July, the marketer returned the old formulation to the market under the name Coca-Cola Classic. The company’s president appeared in ads to apologize for underestimating consumers’ passion for the original formula.
After this expensive lesson, the company began to treat Coca-Cola as a “megabrand,” subsuming its various and growing extensions within one marketing concept. 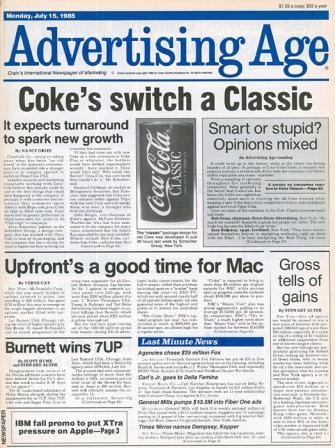 In 2003 Apple was named marketer of the year by Ad Age based largely on the success of its iconic iPod. Apple introduced iPod just weeks after 9/11 while the nation was still slumped in its 2001 recession.