Steve Jobs RIP! The Story of his Life (documentary) 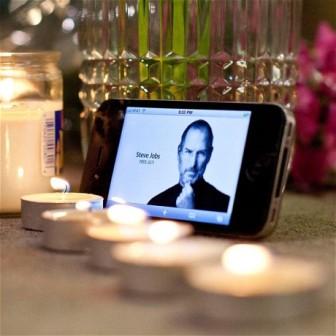 ‘‘The world rarely sees someone who has had the profound impact Steve has had, the effects of which will be felt for many generations to come.”
Bill Gates

GAME CHANGERS Bloomberg Documentary reveals the many layers of the intensely private Steve Jobs – his style of leadership, management and creative process.

Sometimes life’s going to hit you in the head with a brick. Don’t lose faith. I’m convinced that the only thing that kept me going was that I loved what I did. You’ve got to find what you love, and that is as true for work as it is for your lovers. Your work is going to fill a large part of your life, and the only way to be truly satisfied is to do what you believe is great work, and the only way to do great work is to love what you do. If you haven’t found it yet, keep looking, and don’t settle. As with all matters of the heart, you’ll know when you find it, and like any great relationship it just gets better and better as the years roll on. So keep looking. Don’t settle.
Your time is limited, so don’t waste it living someone else’s life.